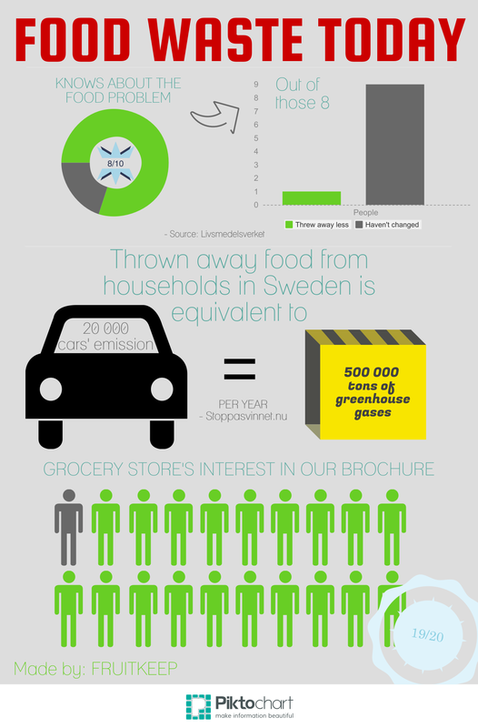 Food waste is a severe problem in the world. Most of all, we throw away fruits and vegetables as a result of not taking care of it. Consequently, there are too many redundant transportation, additional waste disposal, economical costs etc. These consequences lead to global warming.

In Sweden, every person throws away in average 28 kilos of eatable food. In addition, we throw away 26 kilos of liquid food. The consequences of this unsustainable lifestyle are many, it has, for example, a large impact on the environment. According to the website stoppamatsvinnet.nu, the food waste in Sweden corresponds to 500 000 tons of greenhouse gases. That is as much as 20 000 cars emit in a year.

WWF website claims that 25 percent of humanity’s climate impact comes from food waste. It also causes other climate issues like decreased biodiversity, eutrophication and depletion of the earth’s resources. Due to our food waste, too much food is produced and sold. The more we produce and consume, the more affected will all living organisms be. The measure of human demand on the earth’s ecosystems is called an Ecological Footprint.

Production and consumption of food has several important social sustainability aspects; a flourishing countryside, cultural habits that are associated with the meal and the issue with equal distribution around the world. The millennium development goal regarding hunger in the world is unfortunately not a goal that is going to be achieved on a global level according to WWF website.

In Livsmedelsverket report from Ipsos made in 2013, it was presented that fruits and vegetables was the type of food that households threw away the most. 25 % of the consumers threw away fruits and vegetables more than once a week during 2014. A result of this, is not only the issues presented above but also the fact that we import an unnecessarily large number of fruits and vegetables. In Sweden it is not always possible to consume local fruits because of the low production during some parts of the year due to the cold climate. The solution to that problem has been to import large amounts of exotic and alternative products from all over the world.

The main issue is the unnecessary amount of distant transports. As mentioned earlier, the Swede buys more fruits and vegetables than what is utilized, a huge amount of the imported products gets thrown away. The people consume more, which means a higher demand on the suppliers. The exotic products are transported from all over the world to match the consumers demand; transports which slowly destroys our environment. Therefore, it is particularly important to throw away as little as possible so that the transportations will be reduced.

Transportation of fruit and vegetables is currently a significant cause of the emission of greenhouse gases. The amount of emission of transport depends on the length, the type of transport and the effectivity.  Today, train and boat transports are the more eco friendly option in comparison to flights and trucks. However, most fruits and vegetables require effective and refrigerated transports. Therefore, flights and trucks is the preferred way of transporting this produce although it increases the emission of greenhouse gases (Livsmedelseverket website).

The Environmental Protection Agency explains that the greenhouse gases helps to amplify the global warming. There is a natural greenhouse effect creating a pleasant climate which enables living organisms to exist on earth. As the emission of greenhouse gases increases, the thermal radiation from the sun remains even longer, resulting in a warmer climate. This has severe global consequences for both human and nature. According to a study by UN’s climate panel IPCC, a third of the natural living environment for plants and animals disappears if the average temperature is raised by only two degrees. Some species could become extinct if that happens. Today, from a historical perspective, climate zones move very quickly. The result is that some species do not have time to adapt. In addition, when an extreme weather event occur, it can eliminate an entire specie.

With increased temperatures the glaciers melt, which is very clear today. This results in rising water levels. Within the next 100 years water levels might rise with one meter, according to SMHI (Swedish Meteorological and Hydrological Institute). Many islands and archipelagos would then vanish. When water levels increase, there is a risk that the salt water will penetrate many aquifers. Consequently, the availability of water, our most essential resource for surviving, would decrease drastically. That the glaciers are melting and that the amount of snow is decreasing, is also a positive feedback loop. Ice and snow have high albedo; most sunlight hitting the surface bounces back into space. When the glaciers melt and become water, more heat will become absorbed, since water has a low albedo. Hence, the temperature increase will become enhanced.

The society is affected due the high costs when handling an increasing number of natural disasters. Swiss Re is an insurance company which experts annually compile reports regarding the costs of natural disasters, which is initiated by the UN. According to Swiss Re these costs have increased from 5 to 60 billions USD the last 40 years. Even seen from a social perspective, the global warming has negative consequences. Therefore, it should be in everyone’s interest to overcome the global warming. According to the book Ergo Fysik 1, humanity has all the knowledge, the tools, the technology and the economy to fight the climate problems. The problem seems to be on an individual level. One step in the right direction is to not throw away as much fruits and vegetables as today. Therefore, store them right and they will keep fresh longer!